“Not only Armenians, but also the neighboring nations long ago were aware of the keen mind and creativeness of Shirak region masters. The evidence of this is their magnificent creations.”
“Compared to the rest of the population of Gyumri city, the craftsmen took the first place, and among them the masons and bricklayers enjoy special respect thanks to the massive importance of their craft.
Next to town houses there still remain Alexandrapol churches. The biggest one is the Church All Savior, built in 1859-1873 by style of Cathedral Church of Ani. It was built by the noble masters – bricklayer Papik Karapetyan (Batashoyants) and Tadevos Karapetyan (Antikyants) at the leadership of Ardar Manuk. According to witnesses, Ardar Manuk was a carpenter by trade, but he was extremely proficient in architecture. Once a week he went to Ani, imitated the constructed architectural forms of Katoghike in place and later moved those to Alexandrapol for building the similar church there.”
“The carpenter-craftsmen of Gyumri were also well known for their knowledge and skills on wood processing technology of the timber from Sarighamish and Gel. The doors and window frames were made of that timber, as well as ceilings and balconies with various ornaments, household items and tools.
The blacksmiths either participated greatly in the construction of residential houses in Gyumri in XVIII-XIX centuries.
Blacksmithing craft was vividly expressed in various architectural details and forms of the residential houses of the XIX century.” 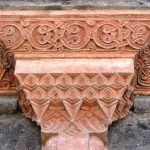 “It is no secret, that Alexandropol was mainly an craftsmen town, where number of crafts exceeded a hundred. They were intertwined with the city’s development. There is the imprint from work of each Gyumri master craftsmen – architecture’s, builder’s, carpenter’s and blacksmith’s work on every building in the town. Even nowadays one can enjoy watching the buildings՛ multilevel cornices, forged gates, wooden window shutters. It is interesting that not only the museums and public buildings were built beautifully but the ordinary residential houses either. And in spite of their outward-stylistic diversity, they are part of an internal unity.”
“Gyumri folk architecture is unique and attractive. There are elements of Russian urban development, European classicism and neoclassicism, the XX century modernism and Soviet Constructivists in it. However, Gyumri craftsmen had compared and localized them with such mastery that had created a national and native environment. This beautiful environment in its turn, aesthetically educated the human soul, endowed him with the artist’s glance.” 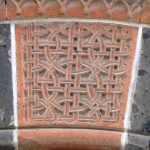